The Bio Dome will be housed and tested within the Research laboratory at the Nikola Tesla Institute in Brazil Chapada dos Veadeiros region (mystical and eco tourism center).

The Nikola Tesla Institute, founded in 2012 in Brasília, Brasil
is a non-profit scientific organization with a goal of popularization of new energy research.

The proposed ecological construction is designed to house permanently the laboratory of the Nikola Tesla Institute, together with a small classroom, a workshop and an office space in the central area. In front of the laboratory a 50kW Tesla Magnifying Transmitter will be permanently used as part of the Earth Resonance Project – providing scientific proof of feasibility of the Nikola Tesla global wireless energy transmission system. The Bio dome and Bio resonance holistic treatment constructions will be embedded in the natural landscape in the Chapada dos Veadeiros region in Brazil. The bio resonance center will consist of Bio domes, Bio resonance centers, Energy Medicine center, Cosmic Shamanism Building and the Consciousness Expansion Center. 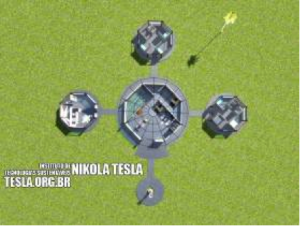 In the 21st century, the technological possibility of the Global system of energy distribution, envisioned by Nikola Tesla is a reality.  The fundamental research work within the Nikola Tesla Institute in Brazil is to provide experimental evidence of the possibility of wireless energy transfer using the Earth Resonance Method. The traditional scientific thought accepts the existence of vacuum fluctuations and the resulting force, and one of our goals is to demonstrate the ideas of Nikola Tesla in regard to the all-pervading universal medium habilitating wireless energy transfer at distance without losses. The observations of Nikola Tesla during his experiments with high-frequency currents, and the effects such as ball-lightning could reveal a source of energy of infinite potential and our laboratory work in the Institute in Brasilia is providing an global open-source research and development platform to continuation of this work of great importance for the survival of humankind.